I was failing in my familial duties and had not met up with one of the cousins for far too long. I have a multitude of relatives in or around the London area so it was time to spend some quality time. She enjoys Japanese food, as do I, but I must say my knowledge of Japanese food in the London area is limited at best. The only thing I know for the moment is that Sushi Tetsu has opened on Jerusalem Passage and that I plan to check it out. She suggested Tokyo Diner on Newport Place just off Leicester Square to meet before we headed to the opera for the evening as it had been recommended to her by a colleague who used to live in Japan, and he claimed it to be a very authentic Japanese experience in London. So, I was sold on that. 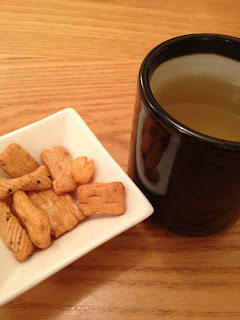 I arrived first and was seated downstairs in this quite simple restaurant. I received a very informative menu explaining the options for those lacking an insight into Japanese food. At the same time I received some complementary tea and snacks to keep the hunger at bay. When the cousin arrived we decided to share a Nigiri set and then have a main of chicken katsu don and a curry udon garnished with chicken. The Nigiri contained an assortment of sushi presented with ginger and wasabi. The salmon nigiri and the hoso maki were the best of this very good dish. 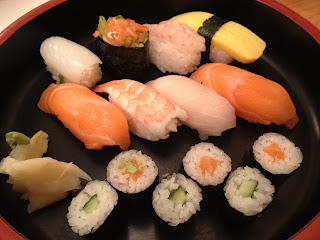 The chicken katsu don saw pieces of chicken served dipped in beaten egg, coated in breadcrumbs and fried, served in a large donburi bowl of rice with soft cooked egg, onion, spring onion and Dashi (Japanese stock). The curry udon comprised of udon noodles, chicken and curry sauce – simple yet did the trick. We were both busy eating our mains that I failed to take pictures. I was probably too busy trying not to slobber the udon all over the place. Both mains were good solid and hearty nourishment.
The portions at the diner are large and although I had passed on lunch I could not finish all in front of me despite my best intentions. 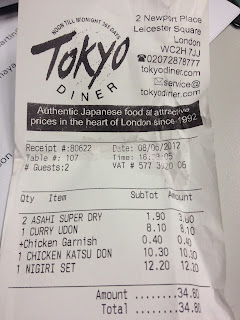 The diner has a no tipping policy which apparently is in line with Japanese traditions. Our dinner for two including a beer each, came to £35, really a bargain. It's simple, it's tasty, it's cheap, and it's a very good option for central London.