I have frequented The Anchor and Hope on The Cut in Southwark on many occasions, usually linked to a trip to the Old or Young Vic. On Saturday, no theatrical experience awaited, however it was an ideal halfway point for our group to meet, half of whom originated SW and the other half SE. I arrive at the venue first, on time it must be stated, at 7pm, that being the time we agreed to meet. I figure that will be a good time given that the theatre crowd should soon be about to shuffle off in search of culture and it should still be early enough before the drinkers arrive. Theoretically then, I consider it to be an ideal window of opportunity.

The place is packed when I arrive but with an eagle eye I spot folks depart and commandeer a table for our group in the bar area. At that point, I receive a text telling me that two of the group are running half an hour late, and soon after another from the other two telling me they shall be leaving their home promptly.  I think this is called living my life according to other people’s schedules.
Fortunately I have the wisdom to order a bottle of house red to keep me going. This is needed as groups come over to me and ask if I’m sitting there by myself and if they could sit at the rest of the table. I must have the look of a drinker who heads out to knock back a bottle of vino on a Saturday. I consider making them my new best friends but decide against it. Eventually the others join the group and we settle in.
Now I’m a fan of The Anchor and Hope. The bar and restaurant are divided into two distinct sections. Tables are packed tightly together, in particular in the bar. The toilets are smartly located through the restaurant to tempt customers with the delights on offer in the restaurant.

Some of the plates are made for 2 or 3 people to share – like the pheasant pie or rib of beef. As I go to the toilet I notice a group in the restaurant who had ordered the slow cooked lamb shoulder. The lamb was falling off the bone. It looked delicious. I had to stop salivating and continue to the lavatories or else run the risk of eviction for strange behaviour.
At our table, I order the English lop which was cooked like boar and served with mashed potatoes. I had to ask what English lop actually is and am informed that it’s a kind of pork. It was served like a stew. The cuts of meat were lean and tasty and served in a gravy along with soft mashed potatoes. I was pleased with my selection. 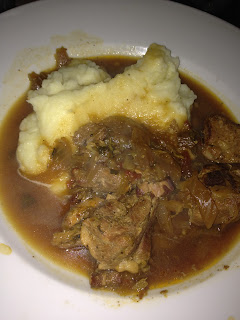 My friend ordered the roast wood pigeon served with semolina gnocchi and braised chicory.  I tasted the pigeon and it was delicious. The gnocchi was a good accompaniment for the pigeon. It was the first time I had seen semolina on a menu and it was the first time I tasted a gnocchi made from semolina and it worked well with the pigeon. The chicory, especially considering it’s in season at the moment was a good idea from the chef. 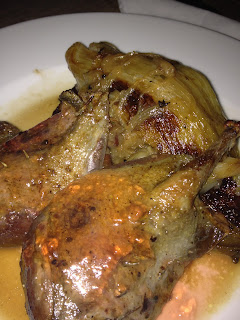 The final selection was the potato and ardrahan pie served with salad. It was only four months ago when I found out that Ardrahan was a cheese emanating from Co. Cork in Ireland, having found out when it appeared on the menu at Magdalen (a very nice restaurant) near London Bridge. It was advertised as a cheese from Cork and I argued that surely it should be from Galway given the village of the same name in Galway. With the assistance of Google I determined that it was indeed from Cork and quite a popular cheese it is too, if one enjoys cheese. Two at our table ordered the pie. The vegetarian was not particularly impressed, stating that it was pretty stodgy as one might expect from a pie and lacked imagination. The other guy was of the opinion that it was nice, but not exactly earth shattering. 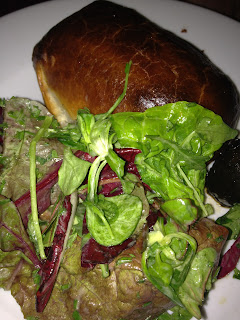 So, two out of three of the mains were consisdered to be excellent and one mediocre. My advice then is to stick to the meat dishes where the restaurant excels and demonstrates imagination. Bear in mind that no reservations are taken at the restaurant, there will most likely then be a wait for a table considering it gets busy, and also considering your (my) friends might be up to an hour late in turning up. But it’s worth it (the food that is), especially if you’re a carnivore and enjoy eating produce in season. A bottle of drinkable house red is £15, and main courses are around the £15 mark.