Having subsisted the past few days predominantly on rice krispies during a trip to northern Uganda and South Sudan, I have harped back to a lunch at the new Hawksmoor on Air Street which I had the day before I departed for East Africa.

Many people are aware of the Hawksmoor phenomenon. To aficionados, they do the best steak in London. I happen to share this sentiment. The fan base is extensive, evidence provided when the 50% soft opening launch booked out within 8 minutes of the email being circulated to those signed up to the Hawksmoor mailing list. Considering that this was an extensive soft opening and that the Air Street venue can host 300 patrons, it’s no small feat. I sent my confirmation within 10 minutes of receipt of the email for the soft opening but was too late.

Hawksmoor being the kings of good service did however send a further option for lunch at 50% off on four alternative dates. So, on a Tuesday lunchtime, it was off to Piccadilly with a friend to check out Air Street. I was further excited by the fact that my friend with whom I was dining, was having steak for the first time, having recently converted from pescatarianism to the deity of carnivorism. In beef we worship.

The venue is big, replete with low ceilings, green leather upholstered seating and lots of very helpful staff. It’s got a nice art deco texture to it. I ordered (a very large) chatauebriand and the former pescatarian the fillet. For sides we selected the baked sweet potato (always a must at Hawksmoor), the triple cooked chips and the creamed spinach. I would have liked to have seen some sort of tomato salad on the menu as I had an excellent one previously at Spitalfields but none were on offer. We also ordered a pepper and béarnaise sauce though really, the quality of the steak means that there is no need to do so. 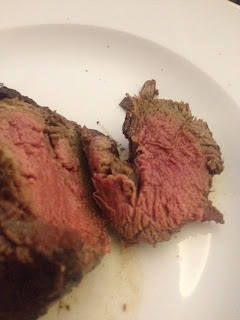 I ordered my chatueabriand rare. It was full or enormous flavour with the juices eeking from the fibres as I cut into it. It really was an excellent piece of meat. The fillet also was delicious and an excellent introduction to beef for my friend. 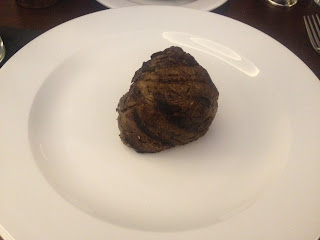 There are many things to like about Hawksmoor. For me the foremost is the attention to details. Little things, like upon our arrival and being guided upstairs, the staff knew our name. I assume the online system indicated that we had checked in downstairs so they were expecting us. Either that or the fact that we were 2 of the few females in the establishment made it easy to determine who we were. Whichever, I liked it.

Secondly, the drinks menu…we weren’t drinking alcohol with lunch and Hawksmoor possesses a non-alcoholic drinks menu with a great selection of soft cocktail alternatives. This just shows that, for those who do not drink alcohol, the non-alcoholic options are not just an afterthought at Hawksmoor. The ginger ‘n’ juice for me excelled…all that was missing was a shot of Jameson (ahem). The spiced tomato juice tempted me also (it would be great with a drop of vodka) and the cornflake milkshake had an allure to it, so teetotallers will not feel like an oft-forgot entity (presupposing that teetotallers are an entity). 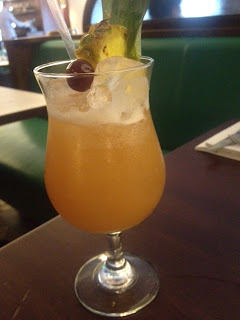 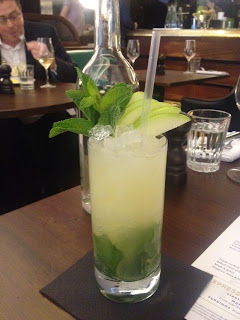 Third, following my last review of Hawksmoor Seven Dials, I tweeted Will at Hawksmoor my review. I noticed on his twitter page, his response to customers’ comments on his twitter feed. Now, I don’t know if it’s him directly tweeting or whether staff undertake this task on his behalf, but regardless, this is a nice customer service touch.

The focus on customer service, emphasis on delivering a high quality product in fabulous surroundings means that the Hawksmoor brand continues to go from strength to strength. Long may it continue.

Oh, and before I forget, I should emphasise that Hawksmoor Air Street is different to its other offerings in that it has fish on the menu in addition to steak. Truth be told, I didn’t even read the fish options, so I suggest taking a look online if you’re interested.

Though full after the steak, we of course had to order the salted caramel rolos which are quickly assuming cult status at the new Hawksmoor. They’re like the rolos we grew up eating, only an adult version. They hit the nail on the head. 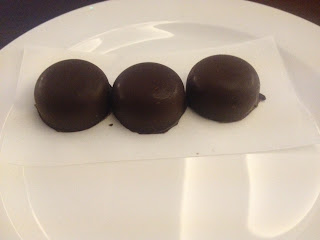 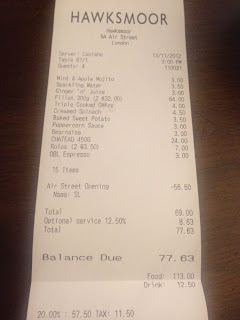