So I sent the word around, putting forth that Mayfair was offering a restaurant purporting to serve burger or lobster for £20. That’s right, £20, in Mayfair. Suffice to say, people were interested. Having finished earlier than anticipated at my pre-arranged hair appointment, I headed up early towards Green Park and to the restaurant as a no reservations policy was in operation. As it was a Friday evening, I assumed it would be busy. I arrived around the 6.30pm mark and already the list of names was long. Others clearly had a similar plan to my own. The lovely doorman took my name and number and informed me that it would be around 2-3 hours by the time I would have a seat. He directed me to a boozer around the corner where I and my friends waited and caught up. For the most part we discussed whether we would have burger or lobster. You’d be surprised the level of self reflection and soul searching that takes place when deciding on what to opt for. Two of the boys, proud as punch decided to go halves, so traumatised were they by the potential of food envy.
A couple of hours in we had not received any telephone call so we figured we’d head back and have a drink at the bar while we waited for the patrons to finish up their food. Luckily we did as the kitchen was soon to close. The front of house manager seated us at the bar to enjoy a beverage while we waited for our table.
Seated at the bar we got chatting to the barman to solicit advice on what to eat. For him, it was the burger every time, and when he informed us that the kitchen was soon to close, we hurriedly placed our order as the trauma would have just been too much had we missed out on the food after all the discussion. After pronounced deliberation we selected 2 burgers, 2 lobsters and 1 rolled lobster. When the floor manager returned he told us that he had informed the kitchen that we had arrived and that they would have continued for us anyhow, which was a very nice touch. 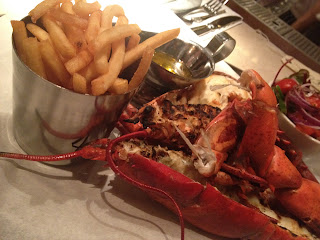 As we awaited our order we looked on enviously at the patrons around the bar enjoying their dinners. A look of contentment permeated their facial features as they masticated their food. Being seated at the bar offered the advantage of watching the barmen make the cocktails, an artistic endeavour in itself. 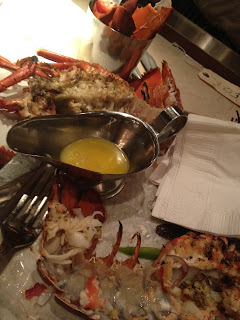 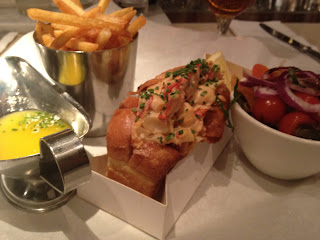 It didn’t take long for our order to arrive. All the mains were served with fries and salad. The plates are monsters, their contents wonderful. The lobster was offered grilled or steamed.  The consensus was that grilled would be best giving a slightly smoky feel to it. The thing with lobster is that it makes your work for it. A lobster scissors was provided but I required assistance to break through the shell. The reward was succulent lobster. The rolled lobster in a brioche bun was a calorific intake of happiness rolled in a light mayonnaise type sauce. There was a bit of a kick to the mayo, maybe some wasabi, but just a slight kick. 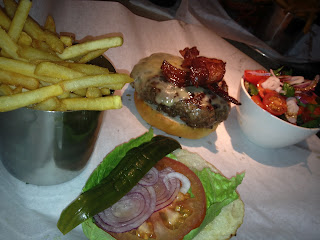 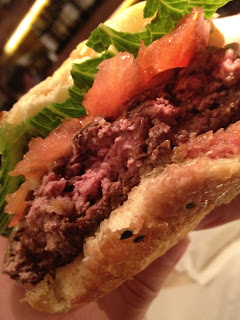 The burger was served with bacon, melted cheese, lettuce, red onion, tomato and pickle. The pattie is quick simply phenomenal , and it has the added benefit of being possible to just pick up and bite into unlike the lobster which makes you work for its goodness. Each main course was very satisfying. One of the boys upon completion of his burger said with an understated aplomb that it was probably the best burger he had had in the last two years. He likes his burgers.
Before we visited, we had concluded that £20 seemed cheap for a burger but expensive for a lobster. Following our dinner, and in anticipation of my next visit, I think I would select the burger as it was truly delicious. That is not to say that the lobster was a poor second best. It was not. It was also most excellent. It’s just that the burger rocked and joins the upper echelons of the burger society in London, joining the greats like Lucky Chip, Hawksmoor and so on. Fine company to be in.
Whether it was the fact that he spotted us taking pictures of our delectables and figured out that a blog may ensue, or whether he was just a decent bloke – the latter I think, and if the former, how bad; our barman offered us a tour of the lobster tanks. The transportation of the lobsters follows the seasons. At the time of our visit they were flown over twice a week from North America. As the season progresses they travel from further south down the East American coast. It’s nice to be guaranteed that the lobster is fresh. Shame they don’t get to see more of London after travelling such a distance but hey ho what to do. 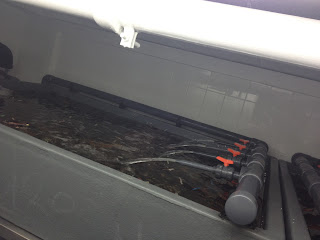 Advice, get there early and get the name on the list, otherwise you will be disappointed. Be prepared to wait a couple of hours. Just head to a local boozer, there are several around the corner in Shepherd Market to choose from to suit an assortment of tastes. Oh yes, and if ordering cocktails, do not order the long island iced-teas as part of the soul of the barmen die each time a patron asks for this drink. 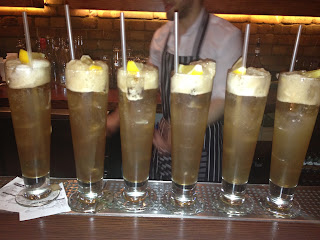 The venue is great, the staff at the door, the management and the bar staff were flawless in their professionalism and friendliness. If I was to make any complaint, it would be that being Mayfair, there were a fair few wanker banker patrons in attendance. Hopefully they buy the expensive wine and cocktails (long-island iced teas I assume) that keeps the venue rolling over. Our bill for 5 people totalled £140 inclusive of tip and 1 beer each in addition to our burger and lobsters.