We are spoilt for choice in this fair London of ours when it comes to food and more specifically when it comes to Spanish food. I am fortunate enough to have Moro of Exmouth Market a 5 minute stroll from my workplace, Jose’s and Pizarro’s are in my ‘hood’ on Bermondsey Street, and last but not least, Dehesa is but a hop, skip and jump from my swimming pool on Marshall Street.
It was then to Dehesa that I booked an early Friday tapas for my cousin and I before we headed off to the theatre to see The Ladykillers – a good show by the way, Graham Linehan (of Father Ted fame adapted the screenplay), and Malcolm from In the Loop stars. By early, I mean 6pm, and as I had just gone for a swim at the aforementioned Marshall Street GLL pool (great reconverted art deco pool, I highly recommend), I arrived around 5.30pm. I was happy to spend a spare half an hour contemplating life, the wine menu and listening to the fantastic music on the in-house music system. Think Slow Train, Nina Simone, Nighmares on Wax, Gotye. All great tunes.
I was sure to be early as my cousin informed me that I shouldn’t be late as she had no phone. No problem thought I as I sipped on my very nice glass of red and contemplated what we would order from the tapas bearing in mind the vegetarian lifestyle choice my cousin has chosen for herself.
By 20 past 6, there was still no sign of the cousin. At this stage I was fairly peckish from the 2km swim and salivating at the chorizo, piquillo peppers, and tortilla the menu offered. I had previously enjoyed the pork belly at Dehesa and the lamb chop (both excellent), so I was beginning to regret my choice of dinner companion. Eventually I received a message on Facebook from the cousin messaging me from the Apple store on Regent Street trying to figure out where the restaurant was. Eventually she arrived to Ganton Street; it was I think a victory for the accountant. 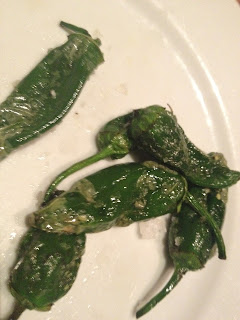 In the interim, I had ordered the padron peppers, grilled chorizo with aubergine and paprika oil, salt cod croquettas with romesco sauce, the tortilla, and the spinach and ricotta malfatti. I was upset as I really wanted to taste the prawns sautéed with garlic, parsley, chilli and fino sherry; but when I say the cousin is a vegetarian, she’s a proper one, not even the delights offered to pescatarians will sway her convictions. 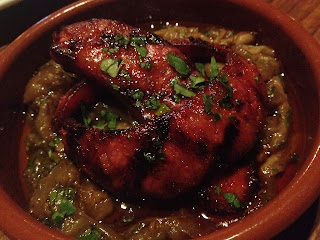 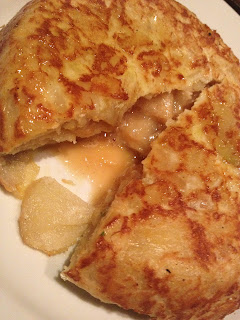 The tortilla was excellent. Just the classic sort, very simple, yet I countless occasions previously, the taste is overdone mush. At Dehesa, the crisp exterior nestles together nicely with the eggy potato centre, perfectly seasoned. Ditto for the padron peppers (or pardon peppers as Microsoft keeps trying to correct me; excuse me said the pepper, no excuse me) presented with rock salt which again were simple and very enjoyable. 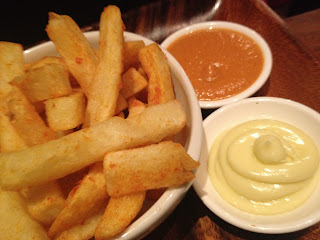 Upon first inspection, I was not particularly impressed with the patatas fritas. They seemed to look a bit too chippy for my liking. However, they were something of a revelation I think due not only to the romesco and alioli sauce, but also due to what I think was a chilli type gentle coating of the patatas. Though it could have been paprika. My ignorance stands to be corrected, but as I said it was just a gentle hint so forgive my ignorance. The chorizo was as expected, of good quality and well paired with the aubergine and paprika. 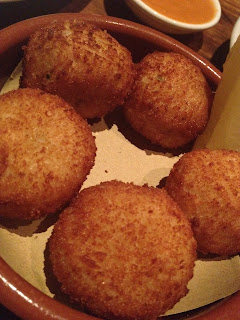 I was least impressed with the salt cod croquettas, but that’s mainly because I really feel the only croquette that should walk the face of this earth is the ham croquetta. Much the debate has been had about the merits/demerits of the constituent elements of the croquetta and essentially like everything with food, it comes down to personal conviction. However, for me the ham croquette is the winner every time. The salt cod is just too overpowering for my liking. The cousin enjoyed the spinach and ricotta malfatti though I didn’t taste. 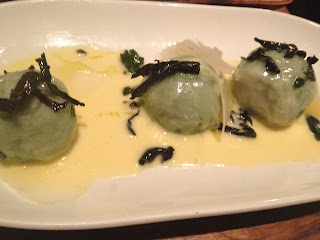 At this stage we requested the bill that was until we spotted the waiter arrive with truffles to the couple seated beside us. With the time ticking close to 7.30pm, we decided to risk it and order one, and though we were late for the theatre it was worth it. 3 truffles were presented with a glass of sherry and biscotti on a rectangular wooden board. 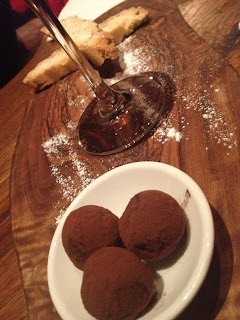 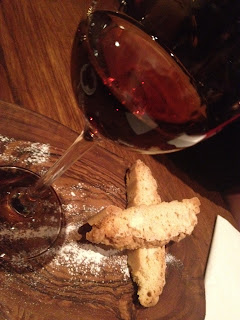 At this point, I should probably point out, that as well as being a vegetarian the cousin was also off chocolate for lent. Why do people give stuff up for lent, I prefer to become a better person. So essentially then, I ate the truffles. They were delicious combining a rich centre that was not quite solid, yet not quite smooth and dusted in cocoa powder. Eventually we got the bill (£60 for 2 including wine and dessert), and headed off to The Gielgud Theatre full of excellent tapas, excellent wine and excellent music. Topped off with the excellent service, I offer my compliments to the chef, staff and whoever put together the song list. I love being spoilt. It suits my personality.