I have been meaning to visit Pitt Cue for some time. Located in the heart of Soho on Newburgh Street, Pitt Cue has made a name for itself for carnivore type foodies. Pitt Cue is another of those small restaurants in London that does not take reservations. It’s very much service on a first come first served basis. Some find this off putting. I don’t have a problem with it at all. So long as you have a bit of time, don’t mind having a drink at the bar or at a neighbouring watering hole while you wait, then no problem. I can’t think of a better way to spend a Friday evening. On the evening I arrive at Pitt Cue, a queue has already formed. Fortunately for me, one of those in the queue is my friend. The doors opened at 6pm and patrons are quickly seated either downstairs in the small restaurant or upstairs on the stools by the window or wait at the bar. We are not in the first sitting but our very friendly host directs us to the bar. 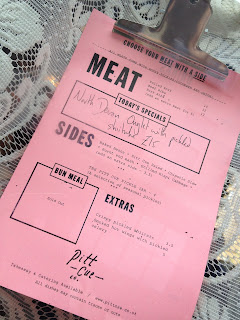 The tiny space makes for quite an intimate atmosphere and you certainly get to know your neighbours. I reckon they can hold about 30 covers-ish. The host does not flinch when she sees my folding bike and we make space for it in the bar. It’s that kind of place. I’m not given a choice in the type of drink despite a bar offering multiple whiskey based cocktails. My friend decides that we are having whiskey sours and who am I to argue. The sours are quite delicious and easily a drink you could get very drunk on given their nectar like qualities. Though I’m fairly sure they’re one of your five a day, so that’s all good. What’s even more exciting are the cows that are handed out with the drinks to account for your bar tab. 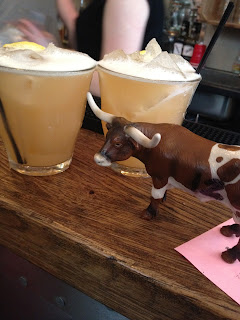 Ours was a brown and white friendly sort of cow, unlike the cow that knocked me out in the farmyard when I was 3 years of age. But, I’ve built a bridge over that episode…bad cow.
The concept for the menu is simple. You choose your meat along with a side. As it was my first time at Pitt Cue the shredded pork and ribs had to feature in our dishes. The special was onglet but the smells emanating somewhere in the environs screamed ribs and pork. So we opted for the pulled pork and beef ribs. We got it with a side of burnt end mash and a side of chipotle slaw. 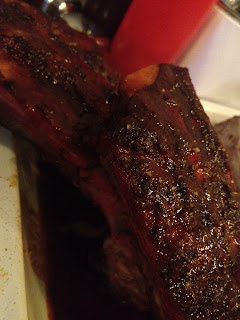 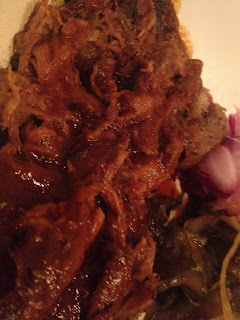 And what about the taste? Amazing. Amazing all round. It got to the stage where in between bites the only words emanating from my mouth was the word amazing. And I like to think of myself as having more than one word in my vocabulary.
There was only one way to eat the barbeque coated ribs – with both hands and then devour with your teeth. A fork and knife just will not suffice. Even writing about it now, I can smell of the beautiful barbeque flavour. There’s no getting away from it. 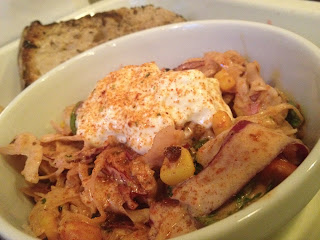 The slaw had a delicious spicy tang to it, served with corn and a dollop of sour cream, and was the only piece of vegetarian type food we came across. Well I suppose you could include the hunks of bread as vegetarian but as the only aim of the bread is to mop up the meaty barbeque mush, this doesn’t really qualify as vegetarian. Even the burnt end mash, you guessed it, creamy and amazing, had a meaty texture to it, served as it was with, yes, burnt end meat. 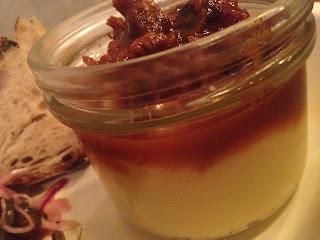 The main courses came served in old enamel type containers, the type you’d normally serve milk to your cat in…or if you’re one of my friends, the type of bowl that he had his breakfast served to him in each morning growing up. Spot the unloved child. 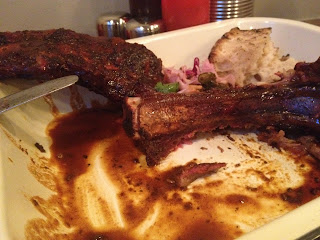 We had beer with the mains, because it simply feels like what should be had. Around 8.30pm there seemed to be a lot less people waiting so for those who are not particularly enamoured with the whole waiting game, this might be the optimum time to arrive. 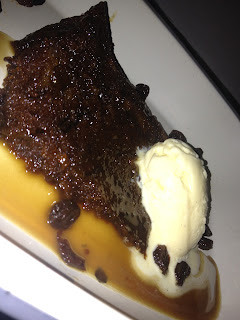 For dessert we had a bourbon pudding and a peanut butter brownie. The brownie was ok, I’ve never really been a fan of brownies since I made them at home myself and saw what I actually put into them. I just don’t get the level of enjoyment out of what goes in. The bourbon pudding now was another matter altogether. Just amazing. Melted in the mouth, came with a scoop of ice-cream, it really was amazing (I promise I won’t use the word amazing for a long time after this post). 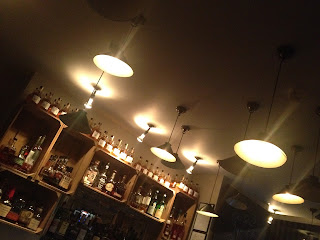 As you can see from the review, I clearly found Pitt Cue to be amazing. Each member of staff we encountered provided fantastic and friendly service. Our bill came to £31 + tip for the food. As we had (a lot) of alcohol, the overall bill totalled £92 tip included In summation, from the door in to the door out, the service, the food, the drink was perfect. This should definitely be high on the list of any carnivore out there. Do a good deed, bring a vegetarian with you and convert them to the meaty side. They’ll thank you for it. Pitt Cue is the kind of venue that makes you feel sorry for vegetarians. It’s just an experience that everyone should enjoy. Flawless, and oh yes, AMAZING.