On a list of the best renowned London institutions, The Wolseley surely hovers at the top of such a list batting away at ease the young pretenders who lay claim to its crown. With such anticipation and high expectations, it’s The Wolseley I select for breakfast with a couple of visiting folk from out of town.  Upon arriving and being seated at our table I order a hot chocolate to assist me whilst I peruse the menu. 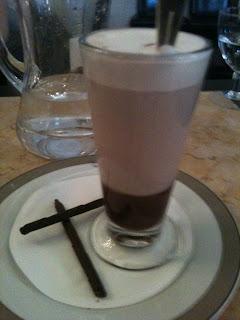 Bustling with advertising execs, media types and business folk, the establishment is somewhat reminiscent of the grand coffee houses of Wien. Indeed, it’s a throwback to the splendid grandeur of when the British and Austro-Hungarian empires were at their peak and full of pomp. Additionally, the menu also pays homage to this Viennese lineage but that’s just about where the comparison stops. In the case of The Wolseley, there is none of the stuffiness. The food is superior, the drinks are better, and above all the service is outstanding, a thing that will never be found in a Wien coffee house.

There is nothing uptight or rigid about the venue. Tables are seated close together but not cramped, creating a bubbling atmosphere, one which is busy yet relaxed. The café manages to balance attention to detail without appearing uptight or having any sense of self-importance. To achieve such a delicate balance with such ease is commendable. The staff are friendly without being intrusive, attentive without being pretentious. A refined luxury permeates its presence, from the architecture to the china, and of course, not to forget, the food. 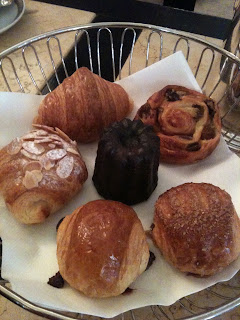 And the food; oh my, the food. We start breakfast with a mixed basket of mini pastries which are made on the premises. I start with the Danish as it’s my plan to work my way towards my favourite – the cannelé bordelaise. Each pastry is a treat, from the croissant to the pain au chocolat. The amandine pain sucré au beurre normand was absolutely incredible, possessing a subtle almond flavour which complemented the crystallised sugar coating. It truly was terribly good, and because it was unexpected, made it even better. And, I had yet to taste the cannelé bordelaise, which lived up to the high expectations I had of it. It’s the juxtaposition of the crunchy caramel exterior, with the rich eggy centre.  It really is a magical creation. Whoever put together the recipe back in the day should have been hailed the local town hero and have had a statue erected in their honour for people the world over to revere. The pastry chef is to be applauded.
Now you may think this is a lot of pastries, but they are mini pastries, if you will, a tapas of pastries to be shared among three. There also was an almond croissant in the basket, however one of our group thought that sharing meant scoffing the whole thing himself. I’m told it was most enjoyable but I only have his word for it. But I’m not bitter, no not at all. Nor, in years to come when we refer to the lovely breakfast at The Wolseley shall I refer to that almond croissant*, though in terms of tasting, the almond croissant would only have been second to the cannelé bordelais on my list of preferences. Traumatic indeed.
*In addition to not referring to the strange case of the devoured almond croissant; in the future I shall also not refer to the fact that my delightful company picked up the bill…still doesn’t mitigate the almond croissant travesty though. 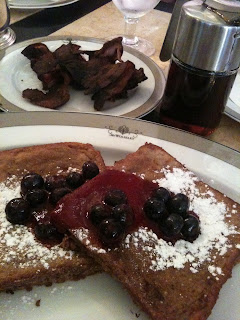 Having initially opted for the kedgeree for my breakfast main course, I change to the French toast with blueberries and bacon which is served with maple syrup. The sweetness of the blueberries and their sauce balances the crispy stringy bacon. I also taste the Greek yoghurt with fig compote which is divine, and according to our waiter, not as fattening as you might think. My companion states with aplomb that it’s the best Greek yoghurt she’s ever tasted. 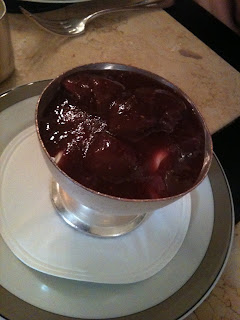 The institution lives up to its long-standing and well earned reputation. In terms of ambience, atmosphere, staff, food quality and décor, breakfast at The Wolseley is simply unbeatable.