Having finished exams on a part-time MSc programme, I suggested to my fellow class mates that we celebrate by heading to Hawksmoor at Seven Dials to enjoy their lunch offer of two courses for £25. Bargain I thought. They even offer a three course option for £27 and I was sure, I would go for this. I felt the need to try the lunch offer given the last time I visited Hawksmoor Seven Dials with 3 friends (at my suggestion), the bill totalled £77 each and I felt guilty having being the person who suggested this midweek for a ‘regular’ dinner. Granted the steak fillet that evening was excellent, as were the sides, but I’m still not sure how the bill came to £77 a head...possibly the alcohol, where the very mediocre whiskey sour (not a patch on Pitt Cue Co) totalled £9 a pop. The starter options for lunch included a ceasar salad and, bone marrow and a confit of mackerel pate. I selected the mackerel safe in the knowledge that my friend to my right had selected the bone marrow...within striking distance of my fork to taste. 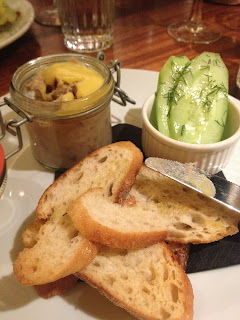 I was pleased with my mackerel. It was rich, served with baguette and cucumber and bloody good. The bone marrow too was good, but rich doesn’t seem to quite cut it when describing it. As my friend after eating one particularly fatty bit stated, that’s never coming off the arms no matter how much exercise is done. But it was good. 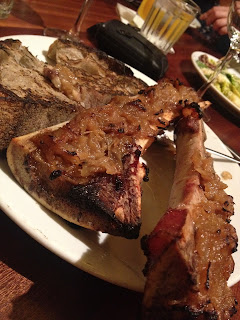 For my main I selected the t-bone. It’s not my favourite piece of steak. I had it cooked medium to allow the marbling of fat to cook through the centre and add to the taste. It was quite nice, though it did not compare in the slightest to the fillet I have had on previous occasions at Hawksmoor in Spitalfields and also at Seven Dials. But that was simply a matter of personal preference in terms of favourite cuts of beef. 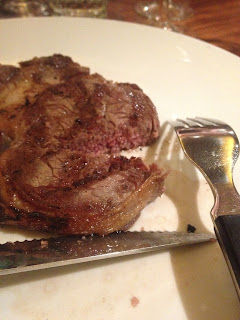 I had a side of sweet potato which seems to have been left standing for quite a while as it was warm (at best) and had that coating on it that food has when left out too long before being served. This was disappointing as the best sweet potato I have ever had was one evening at Hawksmoor Spitalfields where the potato was served piping hot with rock salt sprinkled on top. It was divine. 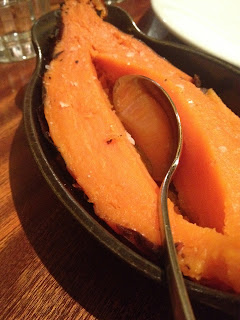 I also enjoyed some of the chips my friend ordered and these were tasty. By the time it came round to ordering dessert, I shocked and disappointed myself by being too full to order anything. The glasses of prosecco to celebrate the end of exams however sufficed as dessert.
I’m a big Hawksmoor fan. Thus far, I have had the best food at the Spitalfields location (sit at the bar, the bar tenders are great), I love the decor of the Seven Dials venue, and I am determined to have the breakfast at Guildhall. They are soon to open in Air Street and I look forward to offering my patronage. In conclusion, Hawksmoor offer the best steak I have been lucky enough to eat in London. It’s a winner. Cows should be proud to die for such a good cause.