The cousin was in London and it was his turn to take me to lunch to compensate for our last disappointing lunch at Bread Street Kitchen (reviewed elsewhere on this blog). I suggested we stick to the St. Paul’s area and to give Barbecoa a go. I arrived on time and had plenty of time to take in the splendid view of St. Paul’s having been led upstairs and seated by the window in the spacious area sparingly interspersed with patrons. As I awaited the cousin who was late to leave his workplace and who then managed to get lost, and then refused to ask for directions, I had plenty of time to listen to the elevator music on offer and check out the mainly male patrons having lunch. First recommendation, change the music. 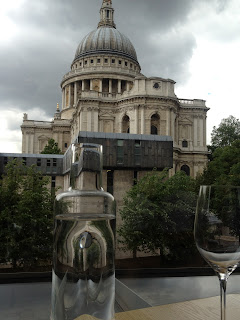 When the cousin arrived, as I mentioned, late, on a Monday, when one has work to do, he decided he wanted steak. Now I usually consider Monday to be a healthy day, and although steak is always a good option, the requisite chips that go with it, not so much. But I decided to go with his recommendation of the special – a fillet for 2, and we ordered it with a side of duck fat chips and carrot and swede clapshot.
Now, on the menu they offered amazing pickled vegetables and big green olives...on ice. This got me worried. Why define the pickled vegetables as amazing. Surely that should be the prerogative of the individual consuming the pickled veg? And when I saw them bring out the green olives, they were indeed on ice. Again, I failed to see the point. So that, combined with the mundane music on offer had me worried. 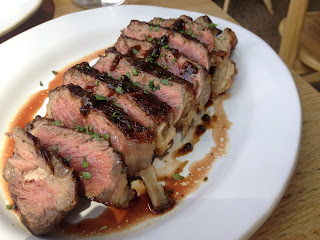 The steak it arrived with a hint of pepper sauce. The steak itself was very good. Probably based on what I had seen prior to its arriving, my expectations were low and they were certainly exceeded. The sides on the other hand were pretty poor. The carrot and swede verged on being inedible. They were meant to be flavoured with orange and rosemary but I could detect neither. Indeed the only flavour I could sense was the butter which was overpowering. The chips were also quite mediocre. 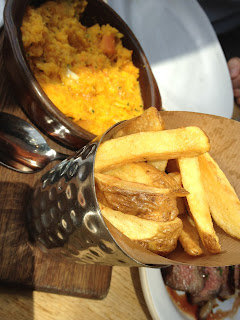 At this point, we should have called it quits. With the idea that you might as well be hung for a sheep as a lamb, we decided to chance a dessert and further extend an already long lunch. We choose a warm apple and custard brioche served with muscovada ice-cream, and a ‘zingy’ lemon meringue pie served with frozen yoghurt. As lemon meringue usually has a ‘zing’ to it, I don’t know why they felt the need to call it zingy, but they did, and here we are. 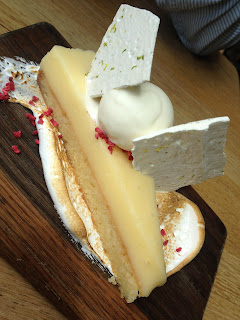 I wasn’t particularly impressed with the appearance of the lemon meringue pie upon arrival and the lemon had a lacklustre look about it, but it was quite good. As was the brioche. Relatively enjoyable. 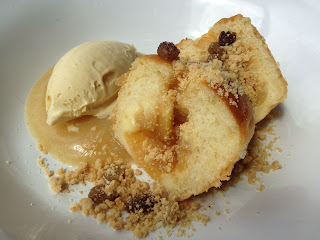 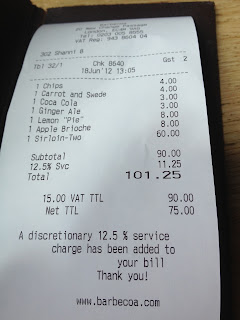 The lunch was at best ok, worth over £100; not a hope in hell. It’s my turn to shout lunch next time the cousin is in London. Hopefully that won’t be for a while.