Having just gotten off a long-haul flight from Dhaka with the horrible Emirates airways, I was craving a burger for lunch. I decided it would be a good opportunity to check out the highly regarded Meat Liquour on Welbeck St. near Bond St station. I arrived just in time for the Friday lunchtime rush hour and groups of workers piled into the large and dark restaurant. As I was a solo diner I easily managed a seat by the bar. First impressions were positive. The bar tender was attentive and polite as he brought me my fresh orange juice in a jam jar. 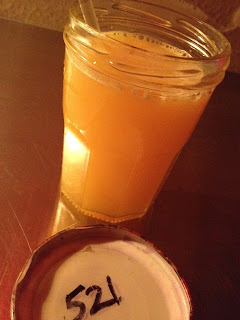 I ordered the double bubble from the menu which comprised of two beef patties, served in a bun which included pickles, minced white onions, ketchup and mustard. It normally also comes with cheeses but I opted out of this. As I write about the contents of the burger now I am beginning to salivate. The truth is that while it was indeed a very good burger, it didn’t quite hit the spot for me and I’m still now sure why. In fact I thought that because I had been away for a while that my taste buds would have enjoyed the burger more than normal. When I say it didn’t quite hit the spot, this was still a very good burger. It’s just that given London has some wonderful burger locations, and here in particular Lucky Chip is the torch bearer, it didn’t quite meet those dizzying heights. 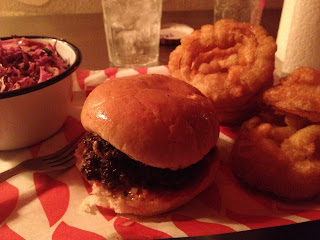 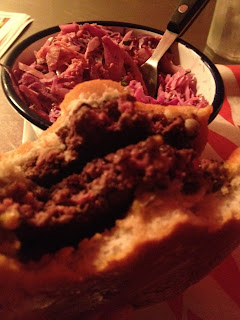 I ordered a side of onion rings and slaw with the burger. The onion rings were described as light and fluffy and they were indeed this, and also nice and salty. They were excellent, truly very good. The slaw was served southern style and also was excellent. The bad news (for me) is that my imagination was too big for my appetite. It would have been ideal to have a number of people at lunch, or two at the very least to share the sides. I suppose I could have also just ordered less, but I was being greedy. Never a good thing. 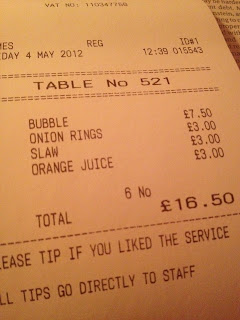 In essence, at Meat Liquor, you will get some decent burgers, and some very good sides, served to you by friendly staff with some good music playing in the background. It’s very good, it’s just not great.