I’m not going to lie to you, I was dismissive. The concept of hotdogs and champagne together just didn’t work for me. Even worse, I thought it was a fad initiated by the hipsters in London. And then, I saw the hotdogs described as ‘gourmet’ hotdogs. I just don’t understand the need for superlatives. So when my friend suggested we go there, I resisted for well over 3 weeks. However, eventually I relented, convinced that following a visit, I would be able to exhibit a level of smugness only exerted by George Osborne after his latest round of cuts.
So off we headed on our Boris Bikes with a St. John’s custard doughnut in the tummy to ward off any hunger pangs. Upon arrival at Charlotte Street, there was a queue at the door waiting to be served. Ha, said I. Fools, nincompoops. We were told there would be an hour wait, so down our name went on the list and off we headed to the bar at Dabbous for a cocktail created by the wonderful Oskar. I was not so secretly hoping that we would not be called back so I could continue imbibing cocktails, however Bubbledogs made good on their word and back we trotted to sample their delights.
We were offered a choice of a table at the bar or in the restaurant by the very friendly maître d. We (of course) choose the bar and were presented a detailed champagne menu where a substantial offering by the glass or by the bottle. We opted for 2 glasses – one predominantly pinot grigio, the other a chardonnay. Both were delicious, the chardonnay was both of our preferences and it was the cheapest on the menu. 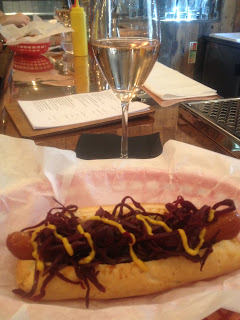 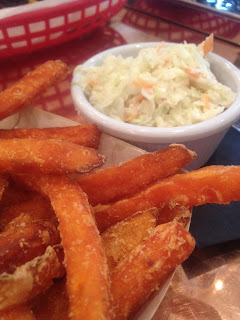 At this stage, I haven’t even spoken about the staff. Sitting at the bar, it’s easy to strike up a conversation with the bar tender so we got the lowdown on Bubbledogs since it’s opened. It’s pretty popular. And I can categorically state, that this is for good reason. And, if it’s good enough for Thomas Keller of Per Se, well then, it’s good enough for me. I bet he was as impressed as I was with the toilets. Be sure to check them out.
We were quite devastated when we went to order a second drink but the bar had closed as lunch had ended and they had to prepare for the evening sitting. I really wanted to sample the Bill Murray cocktail on the menu. To be fair, any menu that offers a Bill Murray cocktail is a winner in my book. The story does not end there however. 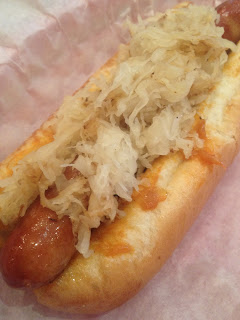 A week later I was back with another friend for lunch. This was preparation for the Bristol half marathon. I’m not sure carb loading should consist of eating hot dogs and drinking champagne the day prior, but off we trotted. Again, the place was busy so the name went down the list and back to Oskar’s for cocktails before trotting back to Dabbous. Just like Groundhog Day we were seated at the bar again this time. This time I opted for the beef hotdog. This was a mistake. I can conclude now that hotdogs should be pork in my humble opinion. I did on this occasion get to sample the Bill Murray cocktail and it was good. 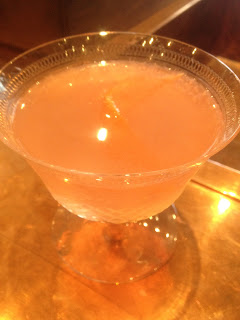 The kitchen table has now opened at Bubbledogs where a tasting menu is on offer as you watch the dinner being prepared by the chefs. Apparently also, it is no longer possible to put your name down the list…you have to queue. Queuing is not for me. I find it uncivilised. I’m happy to put my name down and go elsewhere for a drink but waiting just doesn’t make sense….especially as the cold is upon us. So my advice is to get there for the first sitting before any queuing is required and enjoy a pork hotdog with a couple of side…oh yeah some champagne, and a Bill Murray.
Lunch for 2 and 2 glasses of champagne totalled £33 plus tip.