I cannot imagine how great the feeling must be when you decide to open a restaurant and at the soft opening launch 60 people are waiting to get in. That’s the scene that greeted the opening of Pizarro’s on Bermondsey Street on the eve of the first Friday of December. I get there on the Saturday for lunch. The doors open at 12 and having visited Maltby Street that morning we have half an hour to kill before the soft opening so head up to the market at Bermondsey Square. When we return at 12, there is a queue of 25 people before us waiting in anticipation for the doors to be opened. They are swiftly opened on the nose of 12 and we head in to the beautiful building where the smell of freshly sanded wood mixed with aromas from the open plan kitchen greets us. 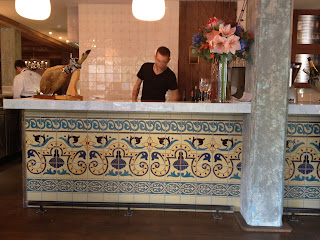 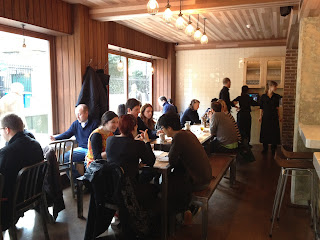 As we await our table we start with a bottle of cava and take a look at the surroundings. The design is delightful in its detail. It’s not just the tiles or the wooden ceiling; it’s the newspaper holder; it’s the coat racks; it's the Aesop products in the toilets; it’s the different type of soft lighting; it’s the various seating arrangements - whether you want to sit at the bar and watch the chefs in action, enjoy the people spotting of those who traverse Bermondsey street, sit together at a large group table where you get to know your neighbours, or in one of the booths for a smaller party. The layout brings people together no matter how big or small the party number but simultaneously manages to maintain privacy. 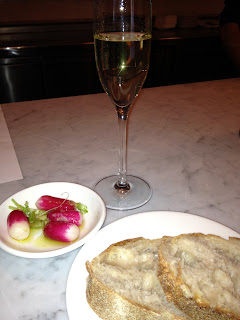 Bread and radishes are brought to us as we sip our cava. Now, I’ve always been of the opinion that the likes of radishes and celery pave the road to purgatory – mundane and boring type vegetables. However, here at Pizarro’s the radishes have olive oil added along with pepper, and when combined with the bread from St. John’s, they somehow work.
We are seated by the window looking out onto Bermondsey Street. Having perused the menu, we commence with some ham croquetas. They are excellent. I’d go so far as to say the best croquetas I’ve enjoyed. 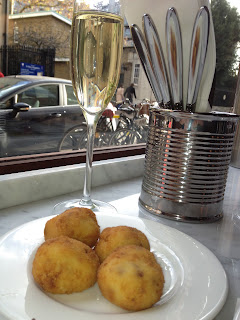 We follow with lamb with lentils. Now I have had a challenging relationship with lamb. When I was younger we used to slaughter our own lamb, which was then frozen and throughout winter we used to have different variations of it pretty much every day for dinner. This did not lead to an altogether loving relationship with lamb, and it’s only in the past 5 years that I’ve started eating it again. Now it’s one of my favourite pieces of meat. The lamb at Pizarro’s ensures that this relatively recently found love continues. It’s tender and cooked to medium, presented with lentils and radicchio. The radicchio does not leave a bitter taste as it can do when prepared poorly. It’s a tasty dish. It is much larger than a tapas type dish and could be served as a main course, but we share. 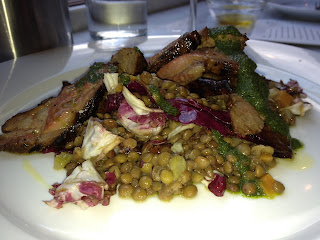 We next opt for the gambas and ham with chilli and garlic. The prawns are fat and juicy, both the taste of the chilli and garlic are prevalent when biting into them, a great combination. I have never had prawns and Serrano ham together on the same plate before, but once again Pizarro’s strikes the correct balance. 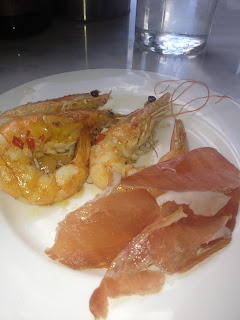 We get two deserts because it's winter and everyone knows you need extra calories in winter to stave off the cold. It's a medical fact. The chocolate toast with caramel ice-cream seems like an interesting choice from the menu. To be fair it would be difficult to mess up serving a dessert which comprises of chocolate and ice-cream and caramel on the one dish. However, this dessert is quite spectacular. The caramel ice-cream is served with some salt like crumbs’ whilst the chocolate is neither mousse nor ganache nor ice-cream. It has a firm texture to it.  I’ll demonstrate my ignorance by saying; I’m not really sure what it was. What I do know however, is that it was bloody well good and served on a thin piece of toast which was hard as a rock. 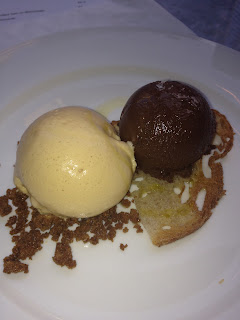 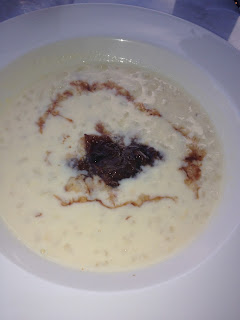 A third friend joins our company, and upon sitting down informs us that we look like the cats that got the cream. There’s probably a modicum of truth in that assertion. My friends finish with a coffee. Pizarro’s get their beans down the road from Monmouth. The only comment I receive from them on the quality is ‘mmmnnnn, good coffee’. I didn’t feel the need to enquire further. As it was the soft opening, there was 50% off our bill which should have come to £80. We pay £40.


For me Pizarro’s is not just about the food which is, as denoted above of the highest standard. It’s about the warmth of the restaurant determined by the welcome of the staff and management. Throughout our visit, Pizarro comes out from behind his busy workplace to welcome friends who visit to support the venture with big hugs and kisses. The happiness is palpable and good will ever present. All in all it’s a warm uplifting experience.
But, then again, when you think about it, Pizarro’s is just the most recent addition in a long line of Spanish international influence – Columbus,  Cervantes, the Spanish Armada,  la quinta brigada, Xavi Alono…Jose Pizarro. I wish it to go from strength to strength as it is about to become my newest local. It is after all, the best Spanish restaurant in London.