On my last visit to Lower Marsh I stopped for falafel despite being tempted by the Mexican flag and the tacos from Buen Provencho. On this occasion, we decide to try the tacos, 2 tacos for £5 or 3 for £6. We just make it on time and are the last two customers of the day before the food sells out. I choose cochinita pibil (or something like that, my Spanish isn’t the best; then again my English is nothing to write home about). It’s pork marinated in orange. Deciding to be adventurous as I do like to live on the edge, for my second taco I choose the pollo en salsa verde, which is simply enough chicken in green salsa. Feel free to contact me for Spanish translation anytime. My friend also chooses the pork as her first choice and the entomatado which is beef in a green tomato sauce for her second choice. 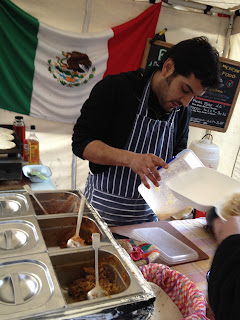 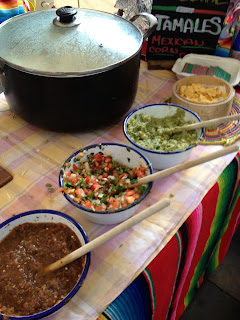 As we wait to be served, we strike up conversation with the very friendly host including the news that the good folk at eat.st have become Timeout’s people of the year. It’s always a good sign when the person serving you enjoys their job, it is that special ingredient that just adds to the food especially when the conditions are near Frozen Planet like outside. I’m expecting to see polar bears emerge from beneath the snow at any moment but I realise that they’re busy giving birth at a Dutch zoo as Attenborough narrates. Just like Frozen Planet this post has fictitious elements to it, mainly the lack of snow but it was definitely cold. 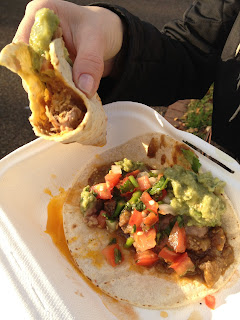 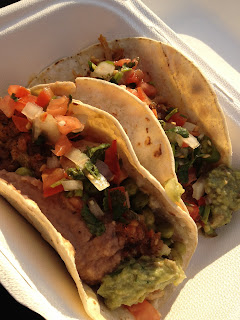 The tacos are served to us with refried beans, and then we add our own salsa dips, tomato and guacamole. The general consensus is that the pork taco is the best, better than the chicken and also better than the beef. It does get messy which is not a good look as we try to eat in public without the benefit of napkins. Silly error when eating tacos, but it’s a tasty filling mess.
Posted by doughnuts&swine at 21:32